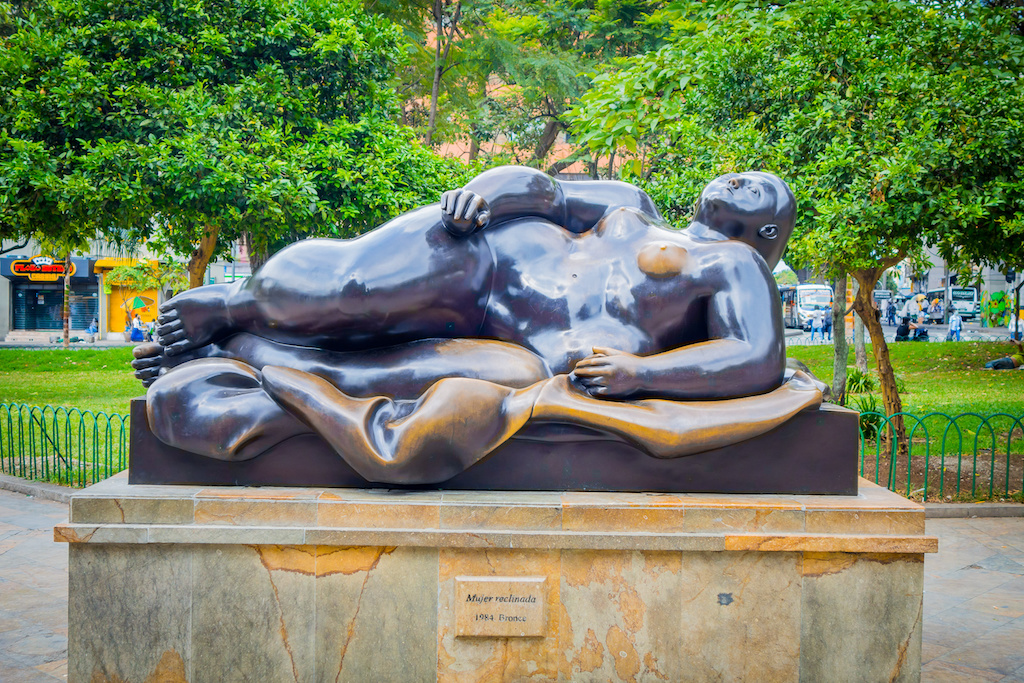 Finding happiness in roundness and generous shapes… This is Fernando Botero, the most highly recognized Latin American painter and sculptor in the world, and one of the few to be recognized during his lifetime for his own style.

Fernando Botero, or as he defines himself the most Colombian of Colombian artists, was born on April 19, 1932 in Medellín, Colombia.

His youth was marked by the untimely death of his father and by the presence of his uncle, a bullfighting enthusiast, who enrolled him in 1944 in a bullfighting school where he stayed for two years.

Botero developed a real phobia of bullfighting, which he exorcised in many of his paintings and from his first attempts in which he reproduced bullfighting scenes.

After this painful experience, Fernando Botero took courses in art history and discovered European painters such as Pablo Picasso. In 1948, his drawings and writings on “Picasso and non-conformism in art” were published in the Sunday supplement of El Colombiano, and in 1949 he was expelled from his school.

In 1951, he moved to Bogotá where he rubbed shoulders with artists, writers and intellectuals. It was in this city that he exhibited for the first time and met with his first successes.

The money earned from his exhibitions enabled him to undertake his first trip to Europe. He spendd four years of apprenticeship in the greatest museums of Europe where he studied the old masters and perfects his mastery of space and volume.

Between 1952 and 1955, he traveled throughoutSpain (Madrid and Barcelona), France with Paris where he found the inspiration for his style, and then Italy on by scooter.

He let himself be guided by the works of Diego Velasquez and Francisco de Goya, by the masters of the Louvre museum and by the art of the Italian Renaissance or oil painting…

He was also influenced by pre-Columbian art and the works of Mexican muralists such as Diego Rivera.

In 1955, he returned to Colombia to Bogotá and in 1957 established his reputation with the “Still Life with Mandolin”.

The “botérien” style was born! All it took was a small hole on the top of the mandolin for the artist to sign his entry into fame. The Botero universe then took on a new dimension: “I had always tried to render the monumental in my work. One day, after a lot of work, I took a pencil at random and drew a mandolin with very large shapes as I always did. But when I drew the hole in the middle of the instrument, I made it much smaller, and suddenly the mandolin took on proportions of extraordinary monumentality…”.

With a pinch of irony and ingenuity, in each of his paintings, Botero explodes shapes, thighs, arms, and cheeks.

Characters swell, dresses swell, instruments lose their sense of proportion. Botero seduces with the shimmering colors and the playful, oversized shapes of his works.

He won a series of awards: at the Colombian Artists’ Salon in 1958 with his painting “La alcoba nupcial” (The Bridal Chamber), the Guggenheim International Award for Colombia in 1960 with his work “La Bataille de l’archi-diable” (The Battle of the Devil), the prize at the Intercol Salon of Young Artists at the Museum of Modern Arts in Bogotá in 1964 with his painting “Pommes” (Apples).

His hometown, Medellín has strongly influenced the choice of his colors and shapes in the world he paints.

Through art, Botero also shows his indignation at the violent scenes in Colombia or the torture inflicted on the prisoners of Abu Ghraib.

Following an attack in 1995 in a park in Medellin (a bomb explodes near his sculpture “The Bird”), Fernando Botero placed a replica next to the debris as a symbol of peace. 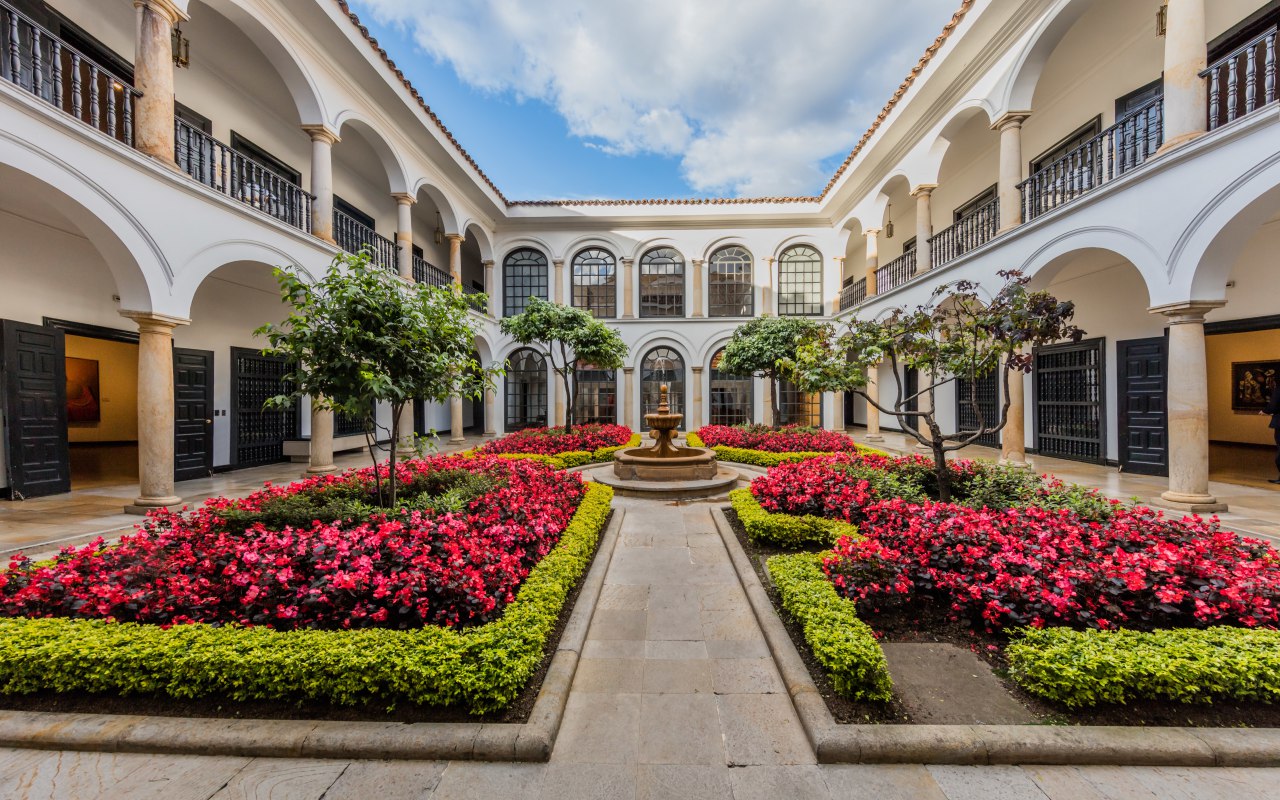 During the 1970s he made numerous round trips between Colombia, New York and Europe. In 1969, he exhibited for the first time in Paris. It is also in the French capital that he created his first sculptures: Botero transposes his universe on canvas into marble. His passion is such that he devotes himself almost exclusively to it from 1976 to 1977.

In marble, Botero perfectly manages to express immodesty and opulence…. as he himself says, “a poetic alternative to reality”. One certainly remembers the 1992 exhibition on the Avenue des Champs-Elysées in Paris. His sculptures have also toured the world: New York, Lisbon, Paris, Munich, Singapore!

In 1979, Botero’s works were declared heritage of national interest. In 1983, bullfighting makes a strong comeback in the artist’s paintings that circulate in several cities in Europe and even the world (Japan and Venezuela).

A museum is now dedicated to him in Bogotá with 123 of his creations and 85 works by other artists such as Auguste Renoir, Pablo Picasso, Joan Miro, Salvador Dali, Marc Chagall, Max Beckmann, Pierre Bonnard.

But it is the Antioquia Museum that contains the largest number of the artist’s works: he donated 187 works (paintings, drawings and sculptures) to it in 2012.

A prolific artist, Fernando Botero celebrated his 80th birthday in 2012 with more than 3,000 paintings and 300 sculptures to his credit.

One recognizes Botero as one recognizes a painting by Van Gogh, a kind of DNA that only the greatest leave to the history of art (quote from contacttv.net). He is, according to arteseleccion.com, the most illustrious representative of 20th century Métis culture in Europe and America.

A major artist, unavoidable during a stay in Colombia. 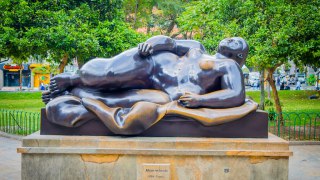