On August 26, 2016, the Colombian government and FARC (Revolutionary Armed Forces of Colombia) guerrillas signed a historic peace agreement ending one of the world’s oldest armed conflicts. Held in Havana, Cuba, the negotiations begun in 2012 seek to turn the page on half a century of violence leaving more than 260,000 victims, nearly 7 million displaced and at least 60,000 missing.

The Peace Accords were rejected by a narrow majority of the people on October 2, but were finally adopted “in force” by parliament at the end of November. This marked the beginning of a post-conflict process in the country, which augurs well for an inevitable improvement in the situation, even though there are still many obstacles to the establishment of a definitive and lasting peace.
Street art peace Medellin 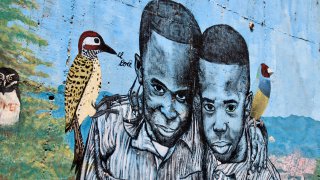 At a time when the 7000 FARC fighters have already joined the demobilisation camps spread throughout the country, and when a new negotiating table has been set up in Quito (Ecuador) with the second largest guerrilla group in the country, the ELN (National Liberation Army), peace seems to be gradually breaking through the foliage of the Colombian jungle…

A retrospective of the conflict: between cycles of violence and failed negotiations

If for many, the Colombian conflict began in the mid-1960s with the creation of the main guerrillas, historians’ opinions diverge, some dating it back to independence in 1819. What must be understood is that violence in Colombia is certainly the result of ideological and political confrontations, but that it has its roots above all in the geographical, economic and social disparities that have persisted since colonization.
Bust of Jorge Eliecer Gaitan in Medellin 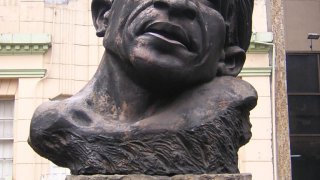 Tensions crystallised particularly in 1948 with the assassination in Bogotá of a charismatic liberal leader, Jorge Eliecer Gaitan, who was in favour of implementing an agrarian reform; the capital then caught fire.

Clashes between radical liberals, the “Gaitanists”, and conservatives spread throughout the country and opened the dark period of “La Violencia”, a decade-long bloodshed in which more than 300,000 Colombians lost their lives. In 1958, Rojas Pinilla’s authoritarian regime (which fomented a coup d’état in 1953) was replaced by the National Front, an alliance of liberal and conservative elites who decided to share power every four years. In the meantime, the liberal dissidents have gone underground and constitute the embryo of the future guerrillas.
The landscapes of Colombia 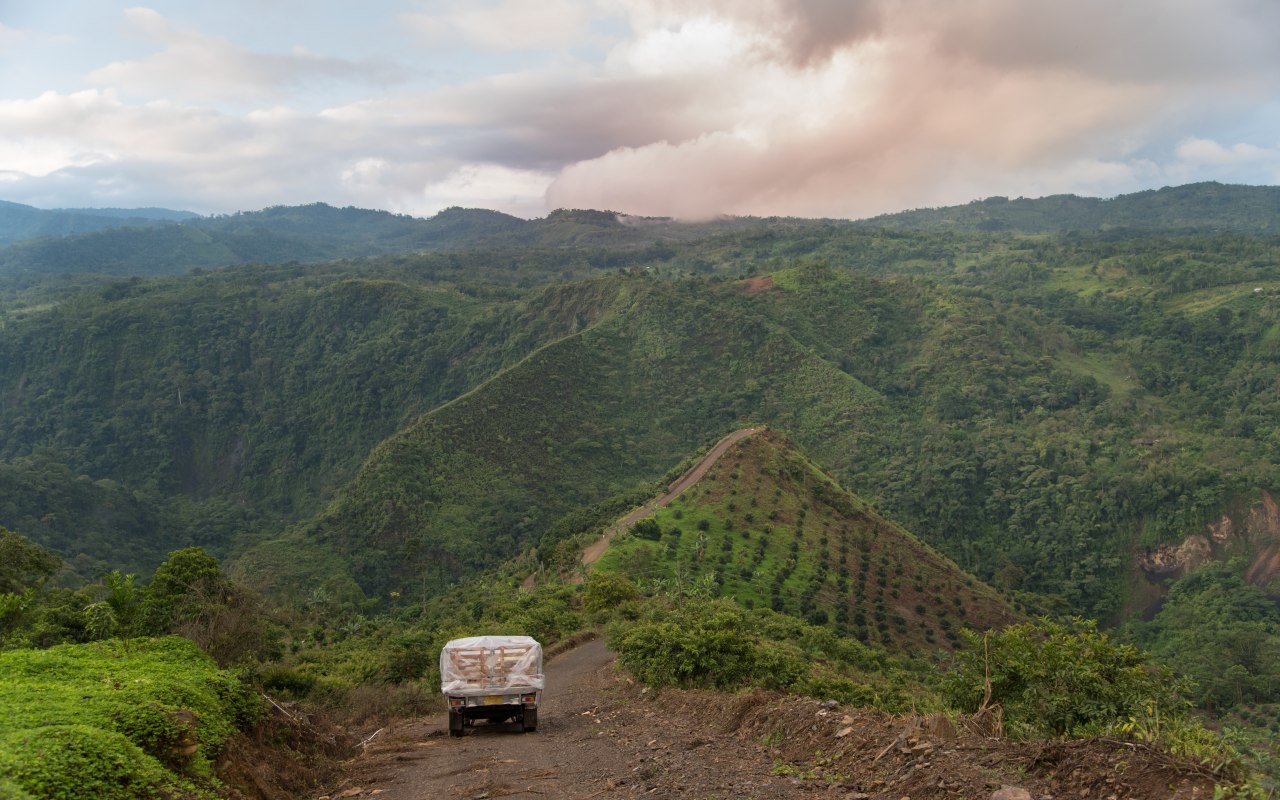 During the 1960s, the various dissident groups and the Communist Party, excluded from any political participation, were consolidated against the backdrop of the Cold War, whereas a few years earlier the Castro regime in Cuba had set an example of successful revolution.
In 1964, the bombing of Marquetalia by government forces, supported by the United States, marked the birth of a unified guerrilla movement of peasant origin which in 1966 took the name of the Revolutionary Armed Force of Colombia (FARC).

At the same time, the guerrillas of the ELN (National Liberation Army) and the EPL (Popular Liberation Army) were formed. The conflict escalates as other guerrillas emerge, together with the rise in power of drug traffickers who organize themselves into cartels and the emergence of paramilitary groups.
The latter, real militias of mercenaries in the pay of landowners and corrupt politicians, are going to lead “the dirty war” triggering throughout the country operations of counter-guerrillas with the complicity sometimes of the regular army.

In the 1980s, the first negotiations with FARC led to a cease-fire and the creation of the Patriotic Union, the guerrilla’s political party. Very quickly, this party was decimated by its opponents, relaunching a cycle of violence. The 1990s were marked by an intensification of the conflict despite the demobilisation of an urban guerrilla, the M19.

In 1998, Andres Pastrana’s government once again opened negotiations with the country’s first guerrilla group (around 30,000 combatants at the time) in the Caguan region.
Unfortunately, once again the desire for peace did not lead to an agreement and the belligerents resumed fighting. The arrival in power of Alvaro Uribe in 2002 marked a turning point. Although Uribe considerably reduced the number of guerrillas, with the help of Plan Colombia (financial and military aid from the United States set up in 2000), his “mano dura” policy had harmful repercussions for the whole country.

The paramilitary groups swarm despite a demobilization agreement negotiated with the government in 2005. The FARC multiply attacks and kidnappings. The State and the army commit macabre exactions such as the scandal of the “Falsos Positivos” (the False Positives) where thousands of civilians were dressed in guerrilla uniforms to inflate the figures for maintaining security. On the other hand, rural areas of the country are severely affected, finding themselves daily in the crossfire. Peasants and indigenous peoples are suffering from the fumigations carried out by the army to eradicate illicit crops, seeing their traditional crops wither away at the same time. The violence is becoming more widespread and civilians, increasingly affected, are beginning to form victims’ associations, embodying the general “fed up” with the seemingly hopeless conflict.

March for the release of hostages in 2008 © Marco Suárez 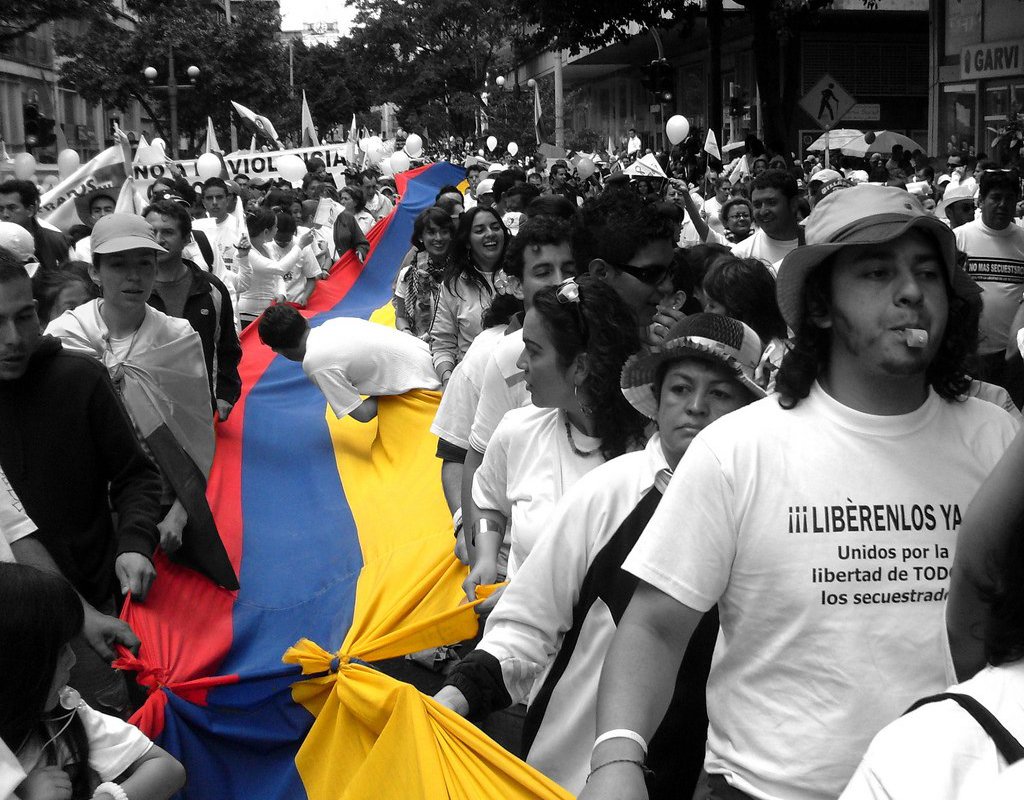 When Juan Manuel Santos, Uribe’s former defence minister, runs for president in 2010, everyone expects him to be the leader who will rout the troubled guerrillas. However, a careful analysis of the situation leads us to consider that the solution to the conflict cannot be military given the catastrophic state of the country after 8 years of merciless war and the socio-economic stakes which are the breeding ground for protest (isolation of certain regions, blatant economic inequalities, concentration of agricultural land, etc.). Santos, newly elected, understood this. The great turning point was secretly and then officially initiated in Oslo where discussions began in 2012 before being relocated to Havana.

In Havana, peace step by step

After the signing of a Global Agreement in 2012 that sets the conditions for peace negotiations, a marathon begins between the two delegations.
The Peace Accords are concluded in 5 major stages:

The Peace Accords have been hailed throughout the world as an example of successful negotiation. Indeed, the text provides for a number of measures aimed at transforming the country in depth. In Havana, special emphasis was placed on victims, minorities and women in particular, in order to generate a breath of reconciliation and hope among the populations most vulnerable to the war.

Signing of the peace agreements in 2016 © Gobierno de Chile

Juan Manuel Santos, winner of the Nobel Peace Prize in 2016, had made peace his main concern during the campaign for his re-election in 2014. After years of deadly conflict that seemed to isolate Colombia from the rest of the world and contributed to building a negative imagination around the country, peace is truly a huge opportunity in many ways. In recent years, the country has continued to open up and develop.

Economically, all the lights are on green, and the country’s economy seems to be clearly benefiting from the decrease in violence. Most of the territory has been secured and tourism is developing at a high rate. Nevertheless, Colombia has lost none of its authenticity. Run for it!

As evidenced by the popular rejection of the Peace Accords last October, Colombian society is still strongly divided, particularly by the aggressive opposition of Senator Uribe (former president) to the Santos government and its desire for peace. Moreover, the Agreements, promises thrown on paper, must be converted into action so as not to generate frustration.
Today, if peace is to take root in practice and be sustainable, the challenge is to generate a climate conducive to social peace and the reduction of inequalities, which are factors of tension, insecurity and illegality. Finally, memory and reconciliation appear to be two key stages, demanding but necessary, in order to be able to heal the wounds of the past and to be able to think about the future. 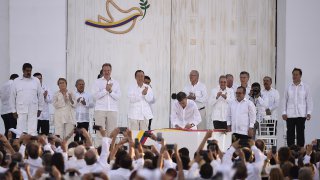