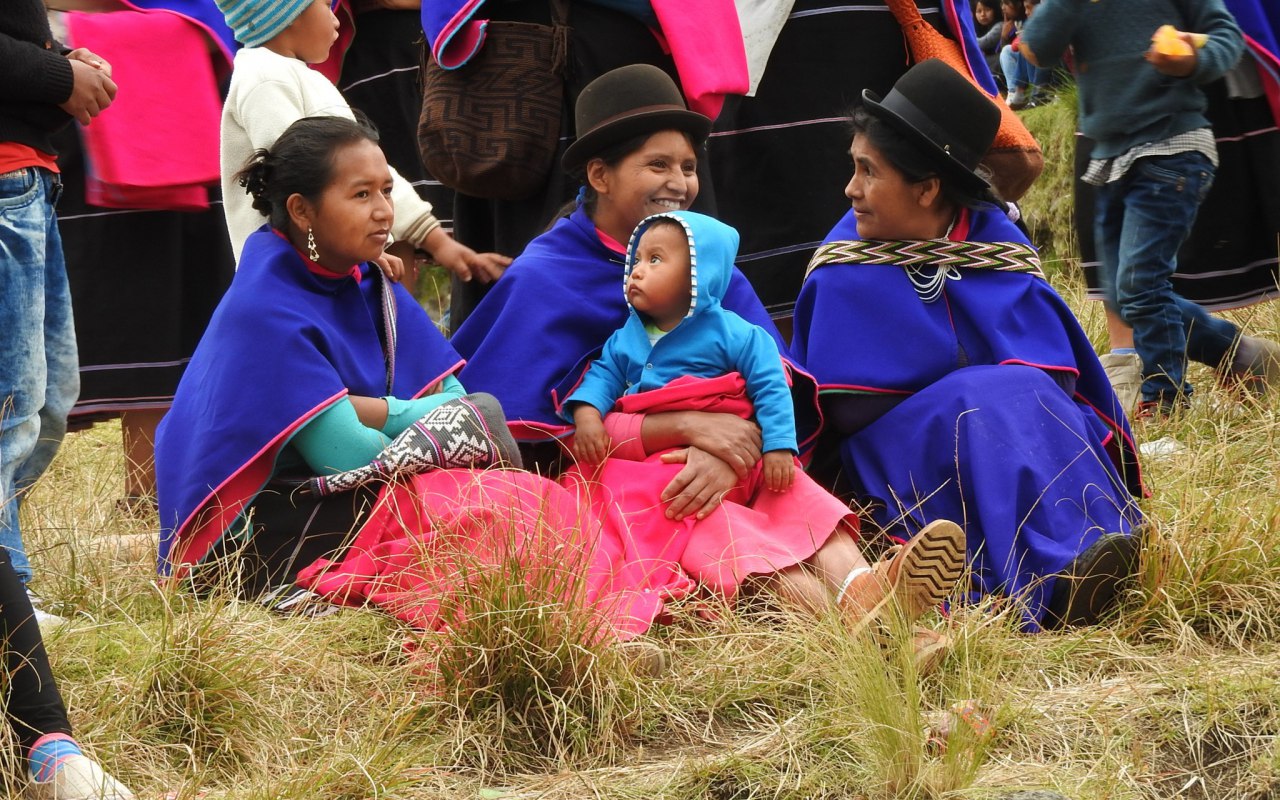 The Guambianos, or Misak people, live in a small territory called Guambia. This relatively unknown region is located in the foothills of the Central Cordillera, the backbone of Colombia, in the northeast of the department of Cauca. Located more up north from the Mascizo Colombiano, the point where the Andes splits in three, the Guambia is surrounded by huge volcanoes and peaks from which many rivers flow to water the páramos underneath.
On the road to the White Popayan or to the archaeological site Tierradentro, you may stop in this region where, although it is cold and humid, you will be charmed by the breathtaking scenery and the warmth of its people.

The Importance of the Earth

You might wonder why so much attention is being paid to describing the landscape. Well, the Guambianos, who have lived in this part of the world for centuries, have a special relation with  Mother Earth, who is both their livelihood and their spiritual reason of existence.

In making this observation, we remind ourselves that belonging to a land is what defines above all the identity and claims of the indigenous Colombians–facing a country whose priority is modernization, often to the detriment of the native peoples who are trying to preserve their culture. Looking at those serene mountains, dimly gilded by the timid rays of the sun, you will certainly understand the attachment that is formed between man and the land of his birth.

The elders tell to the younger that their ancestors were born from the heart of the earth through to the gullies dug by the rivers, creeping between the mountains and jetting themselves into the sea…giving them the name “Guambia” which means “land of waters”.

They consider nature to be the mother and spirit of life. The elements of the cosmos and the world are one whole that gives them life, nourishment, wisdom and dignity. Guambianos are responsible for ensuring the balance between nature and the human. They must protect it, cultivate it, and spiritually return what they take from it.

The actions performed during their earthly life will then be decisive in their heavenly life. By giving offerings, they secure the favors of the earth. Some areas such as the páramos are considered sacred places that should not be entered outside the ceremonies.

Farming is the main activity of the Misak people. At a certain height, between 2,500 and 3,000 meters above sea level, the cultivated land is less fertile, due to the abundance of water and repeated gusts of wind, and difficult to access due to the slope of the land.

Using ancestral farming methods, they harvest on their vertical plots different varieties of potatoes, maize, ullucos (a tuber), but also wheat, rice, barley, garlic or onions. Depending on the season, cabbage, beans and all kinds of vegetables are also grown.

Before, bartering was the norm, but today their presence in the surrounding markets allows them to earn the income they need for their livelihood. Fishing is also a central activity in view of the many rivers that run through the region. Some Guambianos raise cows, sheep, pigs, rabbits or chickens. Wool allows them to make up the essential part of their clothing, magnificent scarves or ponchos.

Just like property rights, the land is cultivated collectively. This is called Minga, or common work. The Guambianos invite their family, friends or neighbors to help them with various tasks, such as farming, construction or road maintenance. This work is followed by a moment of relaxation where men and women get together to talk over coffee, lunch or a glass (or more) of aguardiente (the national alcohol). The quality and quantity of the food is also a criteria of prestige between families. This practice of the Minga is a heritage of the Andes peoples in which the sense of cooperation, unity and social cohesion is reflected.

Just like the Earth, language is an essential attribute in the Guambiana cosmovision and identity. Some linguists consider that their mother tongue, Wampi-misamerawam, was inherited from the Chibcha language. A large majority of Guambianos also speak Spanish.

Tens of thousands of Guambianos live in the the steep slopes of the region. The territory of Guambia is considered administratively as a reserve that belongs to the municipality of Silvia, which is also a village where Guambianos trade and are in contact with the rest of the Colombian population. Life is ran in each village by the Taita, the leader of the community.

Due to the sharpness of the mountain relief, the houses are rather spaced out from each other. They can be built in lime and guadua (bamboo) or for the more affluent families, they can be made of bricks with a tiled roof. These often rectangular or round houses are decorated with many paintings. The kitchen is the main room where daily family activities take place; around the hearth, we meet and talk. The women spin, weave and sew.

Guambianos attach particular importance to clothing. Their elegant dress is a symbol of resistance and collective representation in the face of the Western world and also serves to differentiate them from other native communities in the country. Due to the climate conditions, the clothes are warm, often made of wool, and layers are superimposed.

Both men and women wear long night-blue skirts with wide leather belts that cover their legs. The elder then put on thick ruanas (ponchos) on their shoulders, which they complete by wearing a scarf. Hats are commonly used, sometimes straw and sometimes felt melon. Women drap themselves in bright blue loincloths bordered with red or bright colors. Their necks are adorned with many necklaces that sometimes accumulate to weigh several kilos! On their shoulders, they carry the famous mochilas (woven satchels) to carry everyday things or offerings during ceremonies. The men, for their part, move around with a dark, finely carved wooden stick.

In spite of their very shy nature, they are quite open and curious with tourist…provided that tourists respect them in turn and do not photograph them without permission.

Songs and dances punctuate the various rites and festivities. Their melancholic, even taciturn looks are full of joy and happiness. To the sound of drums and Andean flutes, they dance in lines, men and women face to face, or sometimes in spirals or circles, interrupting the silence of the mountains with cries, songs, laments or other odes to the Earth.

The main celebrations take place at Christmas time, when the Guambianos dress up and paint their faces with red or black. 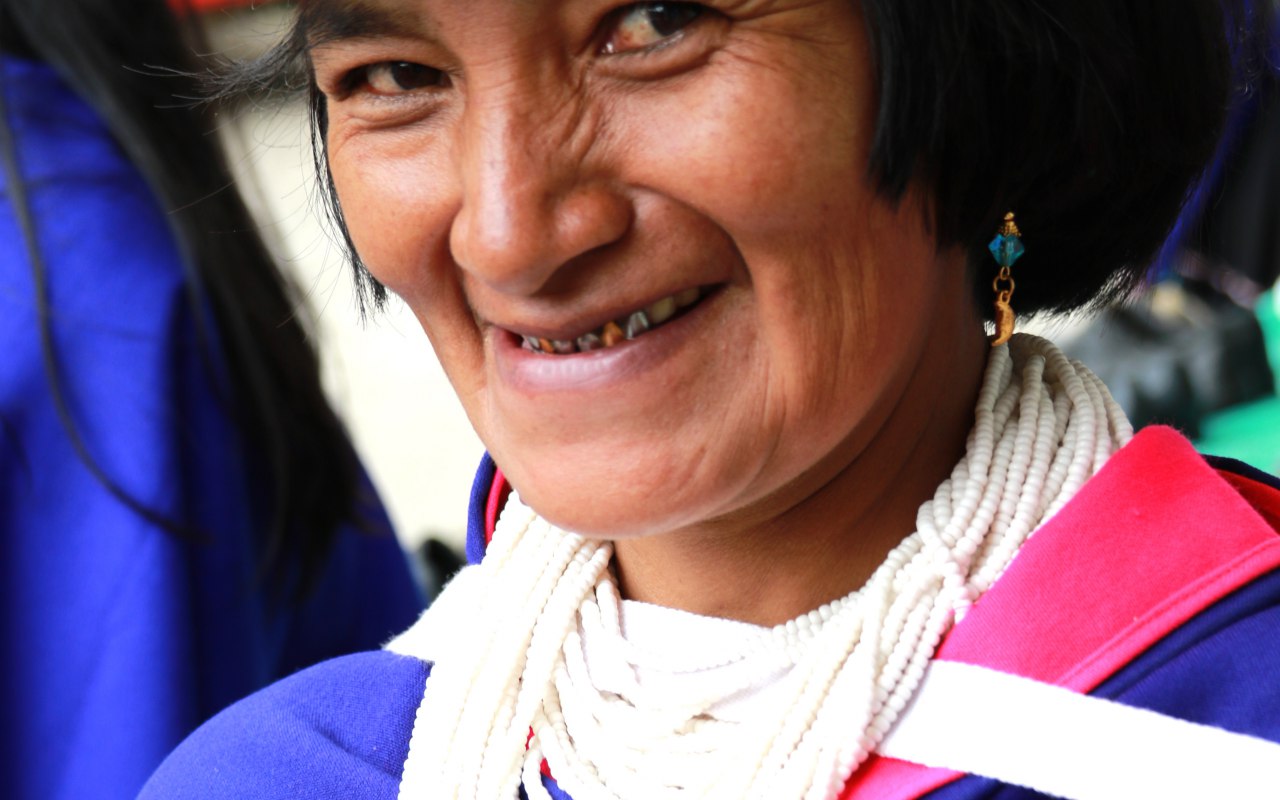 An Ancestral Heritage that Confronts Modernity

The Misak’s beliefs come from an an incredible syncretism between millenary spirituality and the Catholic religion. Part of the Guambiana population has distanced itself somewhat from the rest by practicing Catholicism more fervently, imposed for a long time by the colonists. For example, funeral rites are imbued with Catholicism.
Death is considered a journey, so the deceased must be equipped with coins, food and various utensils.

The Guambianos have developed a science of traditional medicine. For this purpose, they grow pouliot (a kind of mint), arnica, coca leaves or rosemary. The shaman who practices the medicine is called Murbik . He is the intermediary between the men and the spirits.
Education is given within the communities and includes learning agriculture, native language, weaving techniques, etc. Today, Guambianos are struggling to promote their culture.

The Misak were widely exposed to the western culture during the Spanish conquest, then during the installation of the encomiendas (a productive system that concentrated massively the often indigenous peasants) and finally during the assertion of the authority of the modern Colombian state. There have been many systematic evictions and population displacements in this region.
Many Guambianos were uprooted from their lands and integrated into Colombian society over time, most often working as day labourers. Nevertheless, it should be remembered that Guambianos are considered an endangered ethnic group. The Colombian armed conflict has long placed them in the crossfire. Between 2003 and 2008, more than 1,300 Guambianos were displaced by the clashes.

In the 1970s and 1980s, the Misak people played an active role in the various indigenous protests in Cauca to protest against state laws, depriving them of autonomy over their lands and threatening their cultural heritage. For this purpose, they participated in the creation in 1971 of the Regional Indigenous Council of Cauca (CRIC), which fights for the preservation of indigenous territories, the autonomy of the resguardos and the elaboration of their own legislation.

Since 1991, these have to some extent been placed in the Constitution. The Colombian State now allows them to define a Plan de Vida (Life Plan) which dedicates 5 objectives: recovering their own autonomy, an independent justice system, ancestral culture and cosmovision, vital natural spaces and economic and social reconstruction. This re-appropriation of their rights in the face of modernity shows their desire to preserve their traditions at all costs.

Among these communities, many young people are going to school in the city to come back ready to face the challenges of today’s world. These lawyers, engineers and researchers have chosen never to forget their roots. Some local initiatives testify to this, such as the creation of a Numuy Wam radio program or the participation of Guambianos in various local newspapers.

Going to meet the Guambianos is an unforgettable experience. The trails, far from the polluted air of the cities, will guide you between the impressive mountains with the air of the Swiss Alps, from waterfall to waterfall, led by the cool and humid smell of the lush vegetation.

The view here is captivating: criss-crossing valleys and rivers rushing down the steep slopes. But above all, what makes such an excursion worthwhile is it’s people: brave and hard-working, who preserve the strength of their tradition in the face of modern adversity. They, will welcome you with open arms so that a beneficial exchange can be created between two very distinct cultures.