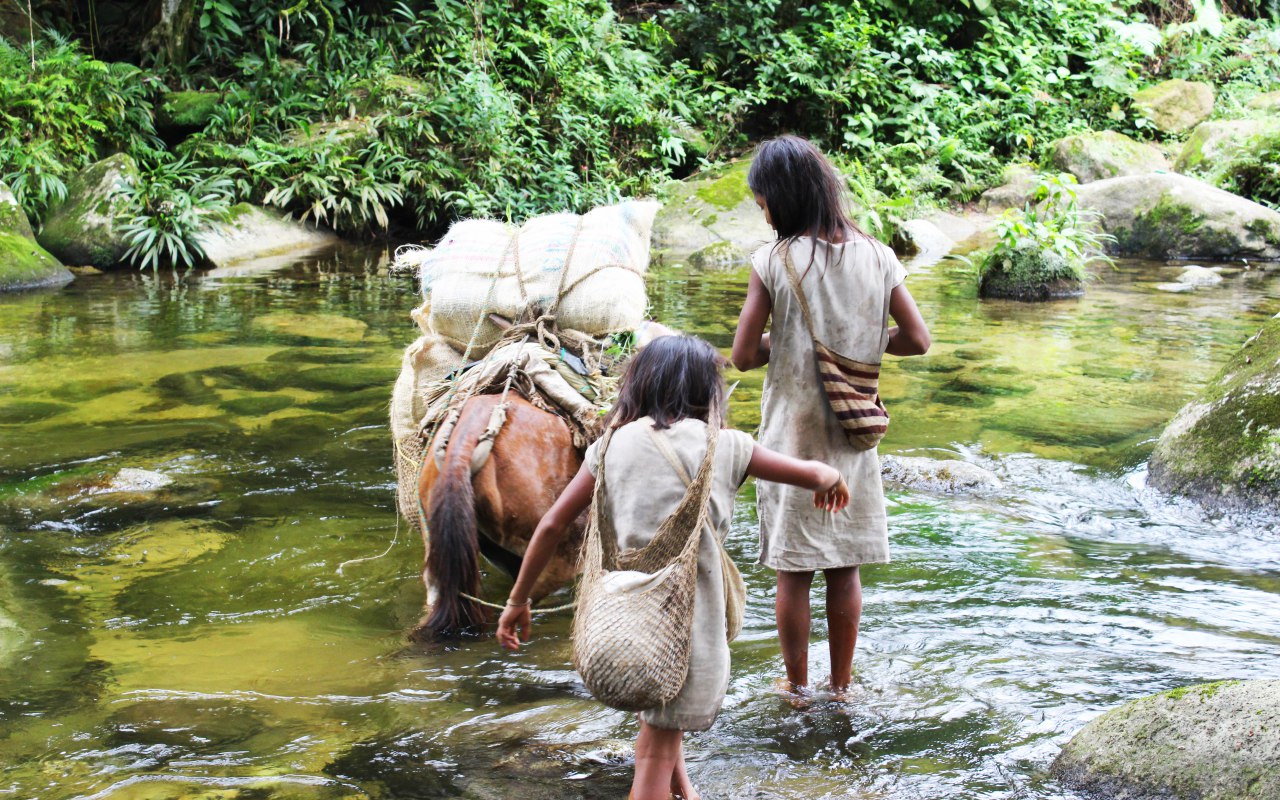 The Kogis of the Sierra Nevada

The Kogi people are the direct descendants of the Tayronas, one of the greatest pre-Colombian civilizations of the Latin American continent, which has now disappeared.

This people with thousand-year-old traditions have withdrawn to the slopes of the Sierra Nevada de Santa Marta, a unique territory with snow-covered peaks and lush valleys that they consider to be “the heart of the world”.

These 12,000 men and women lead a simple and spiritual existence there, respectful of the Earth that gave birth to them. Welcoming very few foreigners, they have nevertheless given themselves the mission of sharing their ancestral knowledge.

In the heart of Sierra Nevada de Santa Marta

Meeting the Kogis (pronounced “Kogui”) means first of all immersing yourself in a breathtaking natural environment. 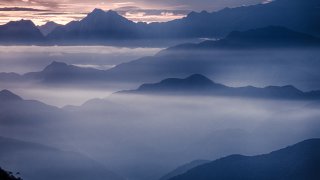 The Sierra Nevada de Santa Marta valley in the fog The Sierra is a unique ecosystem with varied landscapes. It is the highest coastal mountain range in the world: its snow-covered peaks (Cristobal Colon and Simon Bolivar peaks) culminating at almost 6,000 meters (the highest in Colombia) it can be seen on the horizon from the coast (only about 40 kilometers away).

The lowlands are covered with tropical forest that gives way to savannas and fog forests at high altitude (the famous “páramos”) before turning into rocky land as you approach the peaks. This ecosystem is a breeding ground for many kinds of wildlife and is home to 7% of the living species on this planet. Before being welcomed into a Kogi community, you’ll get to know this magnificent territory, crossing crystalline rivers and dense jungle. Perfect for nature lovers.

It can take hours or even days to reach the Kogi villages. You will take the “camino real”, the main path or “Bungula”, and its multiple branches to get a little more into this world apart. The Kogis move here, barefoot, with quick steps, chewing the coca leaves that they carry in their striped “mochillas” (cloth bags made of sisal or fique fiber) carried on their shoulders.

Coca or “ayo” plays a central role in the lives of the Kogis. Harvested only by women, it is chewed by men for its stimulating effect that allows them to come into contact with “Aluna” (the thought, soul or energy). If two Kogis meet, they greet each other with a strident “Nakua” (which means man, but also surprise) and then exchange a handful of coca leaves as a sign of mutual respect. 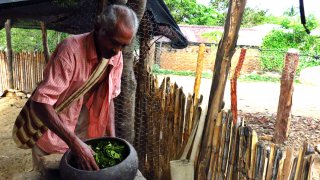 For the indigenous Kogis, but also for their cousins Arhuacos, Wiwas and Kankuamos who live in these mountains, the Sierra Nevada represents the heart of the world. It is the heart of life, Mother Earth, for them a living organism whose summits are the head; the rivers, the veins; and the men, the messengers.

Daily life among the Kogis

If you are lucky enough to be hosted in a Kogi village, you will be amazed at how the locals live in perfect harmony with their environment. 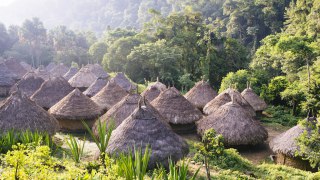 A Kogi village in the Sierra Nevada
The Kogi practice subsistence agriculture based on a polyculture that testifies to a great knowledge of the Earth. Semi-nomadic, they regularly migrate from one territory to another according to the seasons and harvests, never exploiting the land intensively.

On the upper lands, the Kogis cultivate potatoes, onions, cabbage, lettuce, blueberries, tamarilloes (a kind of tomato), pumpkins, garlic, wheat and even rice.
On warmer lands, they grow corn, beans, yuccas, arracachas, malangas (tubers), coca leaves, cotton, pineapples, papayas, guavas, maracujas (passion fruit), sweet pomegranates, oranges and lemons.
The work of the Earth is a daily preoccupation, otherwise the jungle takes over and ends up swallowing up everything. For the natives, agriculture is a “thermometer” that allows them to gauge the state of their relationship with Mother Earth, interpreting good harvests as a sign of harmony and bad ones as a symptom of imbalance.

According to the Kogi, everything in life must respect a natural balance, a spiritual alchemy. In order to take something from nature, for example to burn a hill for new plantations, one must think carefully about why, justify the act, organize a consultation with the community, in order to decide on the procedure to be followed. 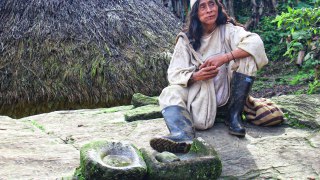 Once the act has been performed, they must compensate for this action by making “pagamientos” (spiritual payments) in sacred places. When man takes, eating a piece of fruit for example, he returns it directly to the Earth, sowing the seeds behind it, sure that the fertile land will make it bear fruit again.

The work is always collective. Men, women and children carry out daily tasks together. The rest of the time is devoted to village and family life. The women weave the mochillas, the men chop wood, the young people fetch water. The whole community discusses and plans the topics to be dealt with collectively. The children play, or listen to the Mamos’ teachings.

The Mamo is the most important personality among the Kogis. He is a spiritual guide, chosen at birth, responsible for maintaining the order of the world through singing, meditation and offering rites, both in daily life and during ceremonies. He dictates the directions that each village must take. Their training begins at an early age when they are taken to the heights of the Sierra to learn how to meditate, in the dark, on the natural and spiritual world. The Mamo also acts as a teacher and doctor in each community.

A way of life threatened by the “little brother”…

According to their belief, the Kogi, noble and proud, are the “big brothers” or guardians of Mother Earth to whom the universe has entrusted the mission of teaching  man the true harmony of things. Faced with the destructive actions of the “little brother”, the “modern man”, who damages nature, builds more and more and never stops fighting against each other, the responsibility of the Kogis is immense since they must spiritually compensate for all these evils.

Since colonization, the Kogis have suffered systematic expropriation of their land. They have long suffered from the armed conflict in Colombia: caught between the fires of the guerrillas and the national army, many have died or had to abandon their territory. 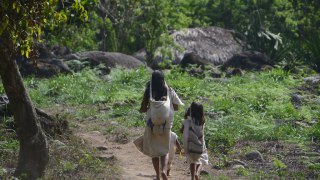 Today, as the violence has disappeared from the mountains, the Colombian government pays little attention to the Kogis’ territorial claims, which carry much weight against the energy development prospects that encourage the installation of power plants or coal mines on sacred sites on the coast.

Some associations such as Tchendukua have mobilized to help the Kogis reclaim their territories or to raise public awareness on this issue. The land that was recovered was reforested and repopulated: biodiversity was once again developed and traditions could be perpetuated.

Why visit the Kogi? The Kogis have a message for us. They believe the world is dying because of our actions. It is therefore really interesting to go and confront ourselves with an alternative world view and such a harmonious way of life in order to learn both practical and spiritual teachings to change our own daily life, our relationship with others and with nature. It is also an opportunity to create exchange between “big” and “little brothers”: we can learn from each other.

Tourism, which must respect this unique way of life, can therefore be opportunity for the Kogis to continue to assert themselves as a people defending the balance of the world. By gaining their trust, you will be projected into this environment where a kind of alchemy is created between a community of self-sufficient philosophers and a preserved nature. 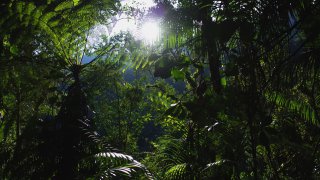 Meeting the Kogis is an experience requiring humility and a sense of adaptation, but it is also an  unforgettable cultural exchange helps us gain a different understanding and awareness of the world. Immersion in the Kogi culture, full of poetry and nature, can really change you… If you feel up to meeting the “big guys”, it’s time to pack your bags! 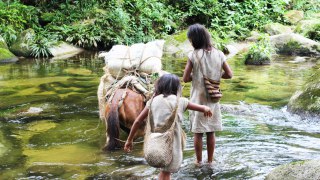