The Wayuu of La Guajira

At the northern tip of the South American continent, where the burning desert flows into the blue wave of the Caribbean, lies the Guajira Peninsula: the arid land of the Wayùu. A semi-nomadic people spread among the cacti, these traders, shepherds and craftsmen make up an “indigenous nation”, straddling the border between Colombia and Venezuela, numbering some 700,000 people, proud to have preserved their traditions after centuries of resistance.

Meet them is to be projected into a rough natural environment where every drop of water counts, but it is also to discover an extraordinary environment, in the middle of the sands, in which man has once again used a lot of creativity and invention to survive.

The Guajira is a dry and arid peninsula shared between Colombia and Venezuela. This territory was a refuge for some of the Arawak peoples moving from the Amazon to the West Indies at the beginning of our era. During colonization, the Wayùu took refuge in this inhospitable desert where they maintained their autonomy and their customs.

In contact with the settlers, the “guajiros” developed trade, breeding and handicraft activities while fighting for the control of their territory, often at the price of blood. Far from the centers of decision and power of the Spanish Crown and then of the fledgling States, this people was nevertheless able to resist for centuries the systematic assimilation of indigenous peoples by the colonizers.

Gradually, this de independence was gradually reduced to a minimum with the development of mining projects in the region, such as in El Cerrejon (one of the largest coal mines in the world), or oil extraction projects such as in Maracaibo.

With the arrival of this “modern” economy, some Wayùu have migrated to the surrounding towns to find work, and because of the porous border, smuggling has also become entrenched in the norms allowing a meagre subsistence. However, these large extractive sites, exhausting the fishing resources or diverting rivers, contribute to the deterioration of their natural environment and have made this already hostile region even more arid.

In normal times, the Guajira has two seasons that punctuate the life of the Wayùu: the dry season or Jemial (December-April) when many people go to the cities to work and the rainy season or Juyapu (September-December) which is the time to return to their lands. The latter allows the Wayúu to develop various crops and fatten their animals. Livestock farming, mainly goats, is one of the main activities of this people, who measure the prestige of their families by the number of animals they own. However, with the phenomenon of climate change, this alternation of climates is becoming more and more blurred and rain is becoming scarce. In this corner of the world, water has become a most precious resource. 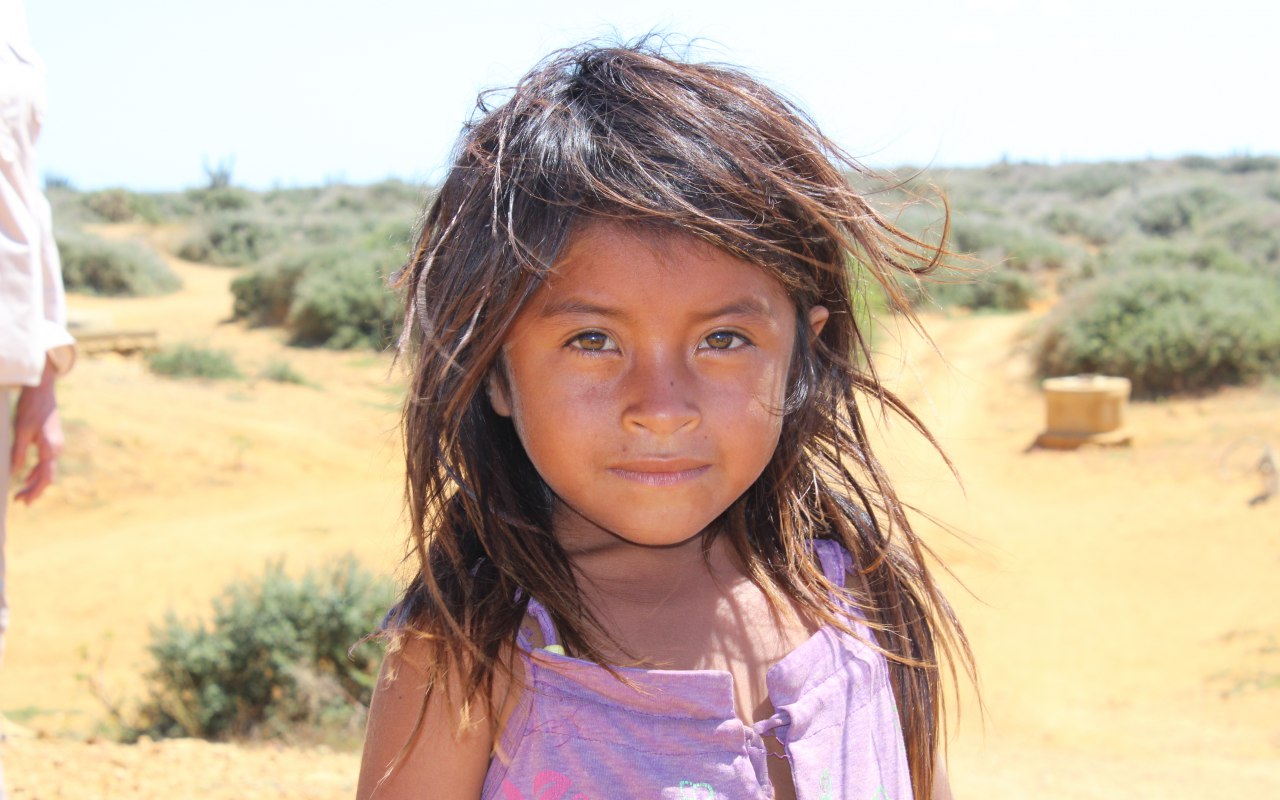 To reach the confines of the Wayùu territories and to be able to participate in the daily life of a village or a family, you have to embark from Uribia in a 4×4 on this unforgettable journey. In the middle of goats, sacks of rice or sugar, water cans, bicycle wheels and other loads of all kinds, the Wayùu travel on the bumpy and straight tracks of the desert. They do not hesitate to place one or two children on the knees of the curious travelers who have embarked on the adventure.

Very smiling and welcoming, the Wayùu will welcome you in their rectangular cactus wood houses, more commonly known as “rancherias”. Next to the central room where the hammocks are stretched out, is the kitchen, a highly important place as is the local cusiine. When the coast is full of succulent lobsters and other seafood, which are traded on the return of the fishermen, the food is mainly goat and maize. For those with strong stomachs, “friche” is the dish not to be missed: made with goat’s offal and blood, it will delight the bold!

The Wayùu are the most important indigenous people in Colombia. Their language, Wayùunaiki, is shared by all and is the basis of their identity, but Spanish is also spoken. The Wayùu society is organized in about twenty clans spread all over the territory.

Membership of a clan is determined by the mother, in whose family the children are brought up. The place of women is in the Wayùu culture is very important. Draped in magnificent colorful dresses, they are the ones who transmit the Wayùu culture, traditions and ways of behaving. At puberty, the young girl must go through an initiatory rite passing through a stage of isolation during where she is only in contact with her mother, who transmits her knowledge. Very independent and of strong character, they are the ones who manage the expenses, weave the mochilas (pouches) or the chinchorros (hammocks), take care of all the details of family life and the representation of the clan outside. Social relations between families of the same clan are organized by the men. Authority is held by the Putchipu or Palabrero (master of the word).
He renders justice, called Sukuaipa using speech as a means of pacifying morals. He is a community, social and cultural leader who acts as a mediator in conflicts of daily life, as a judge and decision-maker. UNESCO has moreover recognized this practice of justice by the palabreros as part of the Intangible Heritage of Humanity.

Another important figure, the Piachi is the holder of spiritual knowledge. During numerous rites and dances, he initiates the Wayùu to communicate with the spirits and the divinities. The use of traditional medicine is still very present in many clans and shamanic rites are a common practice, late vigils during which the songs, transporting you to trance, resound endlessly in the silence of the desert. Funeral rites are long-lasting.

Parents often come from all over the Guajira to pay a final tribute to the deceased, between laughter and tears, often sharing a variety of food and a few glasses of chirrinchi (the traditional alcohol distilled by hand in the region). Cabo de la Vela, a magnificent bay of turquoise water where the winds soften the harsh rays of the sun, is considered a special place since it is the place where the souls of the deceased come to embark on the sailboat of the final journey to the other world. Today, as astonishing as it may seem, it is the kitesurfing sails that swarm through the air!

The importance of spirituality, knowledge of the stars and of the riches of the soil is therefore still maintained today in the Guajira. Often, the patterns used for the ceramics or the various weavings are directly inspired by representations of the spirits or forces that organize the world.

A people “on the verge of extinction”…

Long caught between the crossfire of paramilitary or guerrilla groups who fought over the region because of its strategic location (opening an informal corridor for all kinds of trafficking), the Wayùu have suffered numerous exactions, targeted assassinations, violence and displacement for decades. Today, the situation has definitely calmed down, but other problems are aggravating the stigma of the conflict. Indeed, the area is increasingly affected by persistent drought and natural resources are dwindling. According to the NGO Fucai, water scarcity is bringing the Wayùu “to the brink of extinction”, with many deaths in recent years due to lack of water and food.

The Colombian central government pays little attention to this and access to health care or education remains limited. There is indignation at the living conditions in parts of the Guajira. The Inter-American Court of Human Rights (IACHR) has ordered Colombia to take emergency and preventive measures to save the particularly vulnerable Wayùu people.

Tourism, if it is respectful of their culture, can be an interesting alternative, contributing to healthy and sustainable development. Exchanging with the Wayùu people is a unique opportunity to discover such a special way of life. It is also a way for them to make their situation understood and to raise awareness about the daily challenges they face.

Discovering the Wayùu of the Guajira territory by sharing a time of immersion in a family or a village is an experience that is sure to leave a lasting impression. These men and women of the desert survive in extreme conditions and have developed an extraordinary way of life that has preserved their identity and customs in contact with the industrialized world.

To find out more: